Posted on January 3, 2013 by Reconstructing the Labyrinth 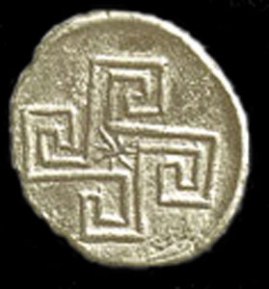 Cretan coin bearing an image of four meanders, stand-ins for the labyrinth, at the center of which resides a star: Asterion.

Most people in the west, where the commonly traced forefathers of our society are the ancient Greeks, will have heard of the Minotaur. Half-man, half-bull, this mythical creature is known as the vicious man-eating monster found at the heart of the Labyrinth.

But the Minotaur is not Greek. He is Cretan. His Hellene-given moniker means “Minos’ bull”, with Minos being the King who lived at Knossos, the creature’s step-father. Born of Queen Pasiphae, a goddess herself, and Minos’ sacrificial bull, the Minotaur was not a monster; he was a brother, and a prince, and a god-made-flesh. His proper name was Asterion, “ruler of the stars”.

His story begins with his conception. King Minos of Crete was given a white bull by Poseidon, and expected to sacrifice it to the god at a later date. Believing the god would not care over the difference, in place of the finest bull, he gave up a lesser animal. This did not go over so well, and his wife, Pasiphae, had a curse placed on her that caused her to lust after the white bull as punishment. The Queen had the inventor, Daedalus, create a hollow bull from wood to attract the one she desired. She climbed inside, and wound up conceiving Asterion.

The half-man, half-bull was kept inside the center of the labyrinth. Sacrifices were brought to him periodically from Athens as payback for the Athenians slaying another prince of Crete.  On one of these occasions, Theseus, prince of Athens, volunteered. Ariadne, another child of Pasiphae, fell for the young man and offered him a means to escape the labyrinth: a spool of thread. He went into the labyrinth, slayed the Minotaur, then escaped by following the thread and retracing his steps. He took Ariadne, and fled the island, victorious over the monster.

Ruler of the Stars

But what can be gathered and gleamed of more original versions of the story is so much more. Digging a little further into available theories, we find versions that paint Asterion as a helpless victim, as a sympathetic and pitiful tragic figure, and as simply misunderstood.

We also find versions that portray him as a god. As deity taken the form of a bull. Of a ruler, and a king. A star, luminous and bright at the heart of the underworld that was the labyrinth. As the scholar Carl Kerenyi so eloquently wrote, upon him was “conferred the hope of a return to the light”. Asterion’s death was not the slaying of a monster; it was a dark sacrificial rite.

But, as Kerenyi continued, the god Asterion did not end there. He was born again, completely unharmed, in the form of a human, “as though the preserved repository of zoe (life) had been reawakened.”

Regarding UPG, this area is still mostly unexplored, and so I do not have many thoughts in order well enough to express them in words. But that is the sentiment I want to leave the topic on until I pick it up again in later posts: Asterion, the Minotaur, as starry god of Crete and as incarnation, the meeting of divinity and flesh.

About Reconstructing the Labyrinth

Hello! My name is Bri, and I run the blog Reconstructing the Labyrinth. I am a pagan who works primarily with the Minoan pantheon, of which I believe myself to be an incarnate member. I am also genderqueer, pansexual, and demisexual. I have a wonderful, loving partner. I am a mixed-media artist and writer with a great fondness for plaid and amaretto-flavored coffee.
View all posts by Reconstructing the Labyrinth →
This entry was posted in Uncategorized and tagged Asterion, PBP2013. Bookmark the permalink.

17 Responses to Asterion, the Starry Minotaur